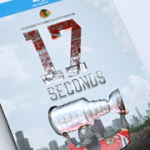 Printing Arts (PA) is proud to announce they provided the in-line foil special effects for the recent release of sports documentary “17 Seconds”. The movie chronicles the Chicago Blackhawks’ celebration of the 2013 Stanley Cup win. The movie takes fans from TD Garden through the parade and rally in downtown Chicago. The title represents the 17 seconds that separates the Chicago Blackhawks’ second and third goals during Game 6 of the Stanley Cup Final. A moment that will surely go down in sports history as one of the greatest Stanley Cup finishes ever.

The Blu-ray outer o-sleeve was produced using +AddBrilliance™ in-line foil technology on 18-point C1S paperboard. The sleeve was UV printed on a 9-color UV Interdeck offset press utilizing spot opaque whites, four color process followed by a registered sculpture emboss of the cover artwork. Due to the overwhelming response by Hawks fans, the title has been re-ordered to meet seasonal demand.

To learn how Printing Arts AddBrilliance™ press technology can be incorporated into your next print or packaging project please contact us.